I recently read a book named ‘Black Hole Focus’, by an American author, Isaiah Hankel – and it blew my mind.

It discusses how intelligent people behave and think, in order to create a powerful purpose for their lives.

Turns out, the world’s most successful people have what would be described by today’s doctors as ‘mental health problems’ 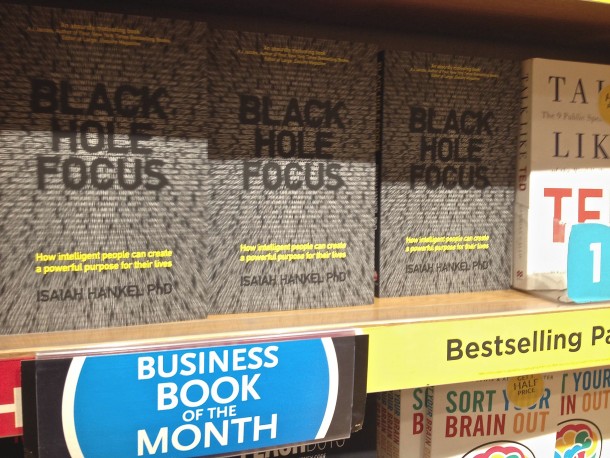 But are these people mentally ill? Or are they so emotionally aware of their behavior that they know how exactly how to use it in order to succeed?

Take a look at 10 clinically insane things the world’s most successful people do.

1. Have delusions of grandeur.

If somebody says you’re arrogant or big-headed, it’s usually a sign that you’re destined for success.

In psychology, a delusion of grandeur is the fixed, false belief that one possesses superior qualities such as genius, fame, omnipotence, or wealth.

It is often a symptom of schizophrenia, but can also be a symptom of bipolar disorders or certain forms of dementia like Alzheimer’s.

People with a delusion of grandeur often believe they have a great talent or knowledge, that others don’t understand or appreciate. When people challenge their beliefs – they don’t back down.

The paradox here is that a lot of the world’s most successful people also have this symptom. Steve Jobs, Mark Zuckerberg, Henry Ford, Thomas Edison, were all told their ideas would never work, but they believed they would be successful and told the world how incredible their ideas were.

The notion ‘thoughts become things’ applies here. You have to see yourself as being the best-  even if it seems crazy given your current situation.

Never let other people destroy your delusions of grandeur.  You were meant for greatness. It’s only a delusion until you become great.

2. Have breaks with reality.

Ever find yourself drifting off for what feels like a two-second daydream – but is actually half an hour?

Maladaptive daydreaming is a condition that was first described by a guy named Eli Somer. The disorder is characterized by compulsive fantasizing that replaces human interaction.

Successful people are constantly escaping from their current reality. They do this by creating a vision for where they want to go, what they want to do, or who they want to be. And then they visit their vision over and over again until it becomes a reality. Of course, they take a lot of action too.

Breaks with reality are necessary for anyone trying to get ahead. Don’t stop creating new visions for your life. Fantasies are your greatest assets. Hold on to them. Make them real.

Depression, although tough – can be useful. Letting yourself sink into a temporarily sad state has a lot of value in the long run.

The pain you feel can be used as motivation – and the release of negative energy can make you better than you ever imagined.

The key is to make sure that you don’t sit in your sad state but that you find a release.

I used to sit and feel sorry for myself when I was going through a hard time. But now I don’t. Instead, I accept it and I embrace it. I leverage it. I use the pain as motivation for the next day. And instead of trying to work through it or force myself to be happy, I’ll entertain it by reading something mellow or by watching something sad.

Low points provide momentum. They keep the pendulum swinging so that another high point can be reached. Don’t try to avoid the low points, embrace them when they come and use them to set goals for improvement.

4. They put the needs of others over their own

Successful people experience intense bouts of loneliness. They usually think people will never understand them or their dreams.

Codependency involves placing a lower priority on one’s own needs, while being excessively preoccupied with the needs of others.

This can often be a bad thing, especially in relationships – but what if the person whose needs you are putting above your own is your client, employee, or collaborator?

Successful people know the value of giving before getting. They’ll allow themselves to enter into a kind of co-dependent relationship with other people by putting their needs last.

The difference is that these successful people remain self-reliant. They are able to serve without losing control.

Tesla, who worked closely with Thomas Edison, was heavily involved in the discovery and use of radio waves, computers and electricity.

Tesla made so many discoveries that some historians refer to him as: the man who invented the 20th century.

But, the genius also suffered from Obsessive-Compulsive Disorder. He was a severe germaphobe and refused to touch anything bearing the slightest hint of dirt.

He also refused to touch anything round, which made his engineering work pretty difficult.

Tesla was obsessed with the number three. Before entering a building, he would walk three times around the block. When staying in hotels, he insisted on a room number divisible by three. At each meal, he would use 18 napkins and have them placed in three stacks of six.

Obsessive-Compulsiveness can be crippling and many people with the Disorder absolutely need medication to function.

But, some people, are just mildly obsessive and compulsive. And many of these people are able to use their OCD tendencies to be more productive and successful – if they are obsessing over the right things.

Fancy yourself as a bit of flirt? Here’s how to use it on the path to success.

Successful people are master attention-seekers – and they have to be. The world is being de-industrialized. Massive medical device manufacturers like Beckman Coulter who create products that literally save people’s lives are being sold for 6.8 billion while mobile text-messaging Apps like WhatsApp are being sold for 19 billion.

If you don’t know how to get attention,  you and your business won’t survive.

Do you ever think something in your head – without realising it’s actually coming out of your mouth? Don’t worry – it’s doing you the world of good.

Studies by Gary Lupyan and Daniel Swignley published in the Quarterly Journal of Experimental Psychology show that talking to yourself, or using “self-directed speech”, triggers mental pictures that can help you function better.

If you see someone talking to themselves, don’t assume they’re crazy. They might just be successful. For example, Oprah, Will Smith, and Jim Carrey all talk to themselves.

Another study from Carnegie Mellon University published in PLOS ONE showed that positive self-directed talk, or “self-affirmations”, can protect against the damaging effects of stress on problem-solving performance.

If you see someone talking to themselves, don’t assume they’re crazy. They might just be successful. For example, Oprah, Will Smith, and Jim Carrey all talk to themselves.

8. Throw it all away

At the height of his fame, MC Hammer’s net worth was valued at around $33 million. The only problem was he was spending $500,000 a month on his lifestyle.

Expenses included the mortgage on his $10 million mansion, the maintenance and upkeep on 17 luxury cars, and the acquisition and care of 21 racehorses. When he eventually filed for bankruptcy in 1996, he claimed only $1 million in assets and $10 million in debt.

After his superstar status plummeted, he created a handful of record labels, has dabbled in tech start-ups and is currently the CEO of Alchemist Management, a Los Angeles-based athlete management firm.

He has more than three million followers on Twitter and teaches social media and marketing at Stanford University and Harvard University.

Many of the most successful people in business are a little bit ‘suicidal’, but not in the physical sense.

They’re suicidal in the sense that they’re willing to risk everything in order to keep moving forward. This suicidal tendency – the courage to throw it all away — gives them a lot of leverage.

Successful people know that things like their health, relationships, and experiences are the only things that should be protected. Everything else can be thrown away.

Successful people make their lives hell. But this is actually a good thing – especially as new research shows that worriers live longer.

Consider this: the results of Howard Friedman and Leslie Martin’s famous longevity study, which tracked 1500 people for almost 100 years, found that sacrificing work-life balance to things like a torturous work project or an extremely difficult personal goal helped individuals live longer. People who lived part of their life way out of balance to achieve something important lived longer than people who lived well-balanced lives. In fact, there wasn’t a single exception to this rule in the study.

Stress — the right kind of stress — is like a miracle drug. Don’t shy away from it.

Robert James “Bobby” Fischer is considered by many to be the greatest chess player of all time.

Starting at age 14, Fischer played in eight United States Championships, winning each one by at least a one-point margin. At age 15 he became the youngest grandmaster ever, and at age 20 he won the  U.S. Championship with the only perfect score in the history of the tournament. In the 1970’s he won the World Chess Championship.

Then, in 1975, he became a recluse and disappeared for almost 20 years.

Many of the world’s most successful people have experienced social anxiety at one time or another. As a result, some withdraw permanently at the height of their success,  Emily Bronte, the author of Wuthering Heights, and J.D. Salinger, the author of The Catcher and the Rye.

Others, like Quentin Tarantino, Eminem, and Ernest Hemingway, withdraw temporarily to do creative work and then reappear when the work is ready to be promoted.

Temporary isolation is an important ingredient to success. Finding time away from other people and their opinions will give you a chance to develop your own original work.

Creativity flourishes in privacy. But then it needs to be released. Don’t feel bad for withdrawing from time to time. Just make sure that you come back and are always there for the people closest to you.

Do you do any of these things? Leave your comments below.